The Aston Martin V12 Zagato is a British sports car/endurance racer made by Aston Martin in collaboration with Zagato to celebrate a fifty-year partnership since the Aston Martin DB4 GT Zagato. Introduced in Lake Como, Italy at the Concorso d’Eleganza Villa d’Este on 21 May 2011, the Zagato was awarded with the competition’s «Design Award for Concept Cars and Prototypes» which has also been won by the One-77 in 2009. 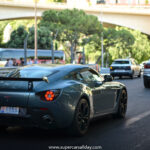